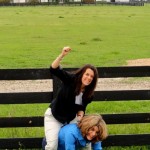 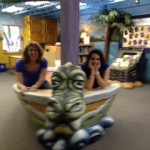 One of the greatest perks of our imperfect occupations (besides the fact that we can say the phrase”shut up” whenever we want) is that we get to travel around the country and meet other imperfect people whom we never would have met. This past week, The Movement of Imperfection took us to Dallas, Texas, where we had the privilege of speaking as part of the Magnificent Minds Lecture Series, a collaboration between Oakhill Academy and Dallas Child magazine.  Though we had some exposure to Dallas (watching J.R. and Ms. Ellie on the TV show), we had never traveled there nor had we had the opportunity to meet any non-TV personalities. The trip was amazing and our host Julie Chapman, Director of Admissions at Oakhill Academy, cooked up some Southern hospitality as she showed us around her city, including Southfork Ranch, where Patty had the chance to ride a horse (see photo). We also had the opportunity to hang out with another pair of sisters, Joy Lynn and Allison from Dallas Child, who had us with “Do you girls want some wine?”  Julie even took Gina to Walgreen’s Pharmacy so Gina could fill a prescription. Gina was so impressed with the service, she declared, “I think I might move here.”

The most impressive part of our trip, however, was visiting Oakhill Academy, a private day school that’s been dedicated to “unveiling the extraordinary minds of students whose gifts had been hidden in ordinary classrooms.”  We were so impressed with all the teachers and staff and Oakhill’s Executive Director, Pam Quarterman. We even got to meet some of the bright students and play in the library (see photo). For more information on Oakhill Academy, click here.

Folks were right about Texas. Everything really is big. But nothing is bigger than the hearts of all the wonderful people we had the privilege of meeting. And even though they poked fun of our Boston accents, we think ya’ll wicked rock!