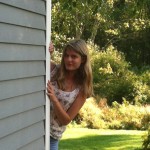 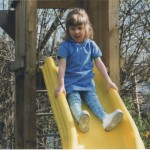 I’m the first to admit; I have many fears. The sight of a snake, spider, or a call from the school on caller ID can send me into full-blown panic. I also live with a fear of heights and roller coasters, and according to my husband, the kitchen stove (“Don’t be afraid to use it Gene; it won’t hurt you.”). I can, however, proudly say that there is one fear that I have conquered.  A fear so great that it kept me from sleeping, experiencing joy of any kind, even wanting to watch the child I loved grow up.

While my fear of spiders and snakes and cooking has been with me since childhood, my fear of autism didn’t come until I was well into my thirties. Before then, I had never even heard of autism. I didn’t know anyone who had it, nor did I ever consider that I could have a child impacted by it when I was pregnant. (Note: I was more worried that I’d give birth to a baby calf, given my excessive  pregnancy weight gain.)  Autism didn’t even enter my consciousness when my daughter was displaying the classic signs of it as a toddler – poor motor skills, hand flapping, aversion to loud noises.

Though autism came to me late in life, my introduction to it was quick. It actually came by mail in the form of the results of an independent neuropsych exam done when my daughter was in kindergarten. The report said she had Asperger’s syndrome, which was a form of high functioning autism.

Immediately, I raced to the Internet and started researching it. When I saw the results of my searches, I was heartbroken. But as I read on, my sadness morphed into anger, especially when I read that it only affected 1 in 250 kids. I was angry at everyone – myself, my husband, God, and mostly, the  249 other people who didn’t have to deal with it.

If I got that diagnosis today, I’d have been angry with a lot less people.

Today, according to a study released by the Center for Disease Control and Prevention, autism now affects 1 in 50 children.  Whether you view this study as accurate or not, most people will agree that autism is indeed increasing. So today, if I were pregnant, I’d not only have to worry that I was giving birth to a baby calf, but also a baby calf with social issues.

What I didn’t know about autism – the positive side.

The good news about the increase in autism is that there is more information available than ever before. If Katie were diagnosed today, I might have been able to find a blog or online support group that would have told me some of the things I just didn’t see online: the positive side of autism.

Maybe then, I wouldn’t have thought of autism as something that would ruin my life, but enrich it. While it’s true that autism brought great pain to me (watching her fail academically in the public school and struggle with bullying), it has also been the source of my greatest joys – watching her overcome challenges and reach  new milestones (she was recently accepted to the college of her choice).  I would have also known that raising a child with autism brings the gift of compassion, an appreciation for the little things in life, a strong faith, and a knowledge of strengths and resilience I didn’t know I had in me.

Most importantly, I would have known that the very thing I feared would ruin our daughter and our family would actually make us all stronger. And that being the Mom of that  chosen 1 in 250 wasn’t so bad after all.

View all posts by admin →
Breaking News! Winner of Shut Up School Photo Contest Announced!
Laughing our Behinds Off (If only that were literal)